SRIRANGAM – THE BOOLOKA VAIKUNTAM (THE PARADISE ON EARTH)

The Sanctity of a Temple is accorded on the basis of its threefold popularity of the Presiding Deity, the quality of the holy waters and its hoary past. The Holy Temple of Srirangam has all these attributes in a very rich measure.Srirangam is the foremost among the eight spontaneous shrines (self manifested deity) (swayam Vyvkta Kshetras) of Lord Vishnu.Of the 108 Vaishnavite Holy Shrines, this is ‘The Prime’ and considered the most sacred. So many acharyas have dedicated their whole lives for this temple.
This is the only temple where 11 out of 12 Alwars of the Vaishnavite Cult having sung and has the large number of songs in its praise.

The great Sri Vaishnava Acharya Sri Ramanuja (1017-1137) played the most important part in resuscitating and reinvigorating Sri Vaishnavism and made the philosophy reach the masses. He reformed and streamlined the administration of the temple in so thorough a style that most of the conventions followed today originated from him. Even today we can have the darshan of this saint’s physical body in his temple just opposite to Sri Chakrathalwar temple near entrance of the temple. The figure is so natural and perfect that even the finger nails are life-like.  Two times in a year the temple priest will mix pure camphor and saffron and apply this paste over his physical body.

Followed by him, Swami Sri Desikan had also done remarkable services and had written many worthy books both in Sanskrit and Tamil.
Swami Manavala Mamunigal was the last acharya in Guru-parambara, the first being Lord Sri Ranganath.  This great saint had contributed discourses on ‘Thiruvaimozhi’ for one year in’Chandanu Mandapam’ infront of ‘Namperumal’ who had stopped all other festivals for nearly one year(16th sept’1432 (Parithabi Avani 31 Friday) to 9th July 1433 (Pramathesa Aani Moola Nakshtra Monday) to hear his discourses bywhich Lord Ranganath became his ‘sishya’ and had given a ‘Thanian’ (a portarit) starting ‘Sri Sailesha Daya pathrae…..’.The Shrine is also sacred to the benign planetary deity, Sukra, one of the Navagrahas.Srirangam Temple is the biggest and most ancient temple in India. The temple is built and decorated in so grand manner as to inspire in devotees an air of sanctity as soon as they enter it.

The temple has seven rampart walls built of granite stones. There are 21 ornamented towers which are bedecked with marvelous iconographical and mythological images. The sculptures found in all gopurams are exquisite and soul satisfying.All the mandapams and pillars are noted for their artistic beauty being marvels of sculpture and of archaeological value. Thus the temple proclaims the glorious culture history and architectural splendour of our country from time immemorial. It is by all standards on par with the greatest architectural beauties anywhere.Spanning an area of 156 acres, the Srirangam Temple takes the pride of place as the largest temple in the country.Its great antiquity tradition goes back to the time of the immortal epic, the Ramayana. The ‘Silapathikaram’, one of the five great epics of the Tamil literature, also gives a brief description of Lord Vishnu, reclining on the banks of river cauvery, a probable reference to the deity of Srirangam. 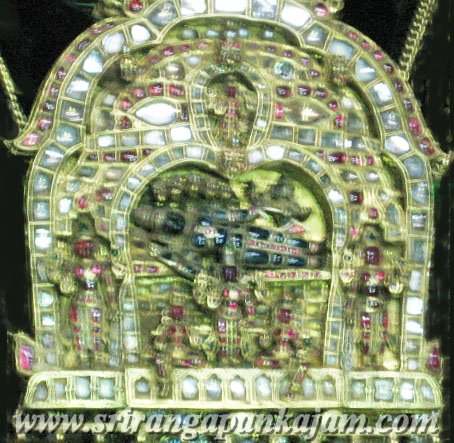 (The beautiful Vimana Pathakam)
Apart from their inestimable value, the temple jewels are masterpieces of jewelers art and are inset with gems of breathtaking beauty and excellent craftsmanship.

Numerous festivals are of course celebrated in Srirangam, round the year, (approximately out of 365 days 322 days the temple will celebrate some festivals somewhere in its complex) But Vaikunta Ekadasi festival steals all the thunder for it shows the religious fervour and ceremonial splendour at its best.

(This is a very old-rare photo.  This Thirumugamandalam is a old one taken around 1957.  Pls see Silver-cover plate over sri ‘Adi Sesha’!)

The Supreme Lord Sri Ranganatha is a recumbent post on the right shoulder is facing south, on a soft couch provided by the spiraling coils of the celestial serpent, “Adisesha” its five raised and wide open hoods protect the Lord like an umbrella. This monolithic image is constructed in stucco. So the idol is anointed once a year with special unguent made of fragrant sandal wood, camphor, musk, resins and some special herbals in order to protect it from the rages of time. ‘Punugu’ oil is also applied every Friday.The experience of worshipping Lord Sri Ranganatha is indescribable. It has to be felt rather than described. To put it in modest terms it is Ecstatic.The first enclosure surrounding the inner shrine, the Arthamandapam and the Ranga Vimanam is known as Rajamahendran Thiruchutru, King Raja Mahendra (1060-63) A.D. son of Raja Raja II is stated to have built these. 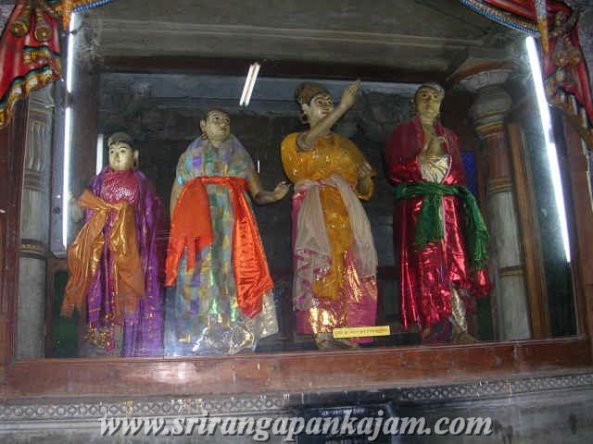 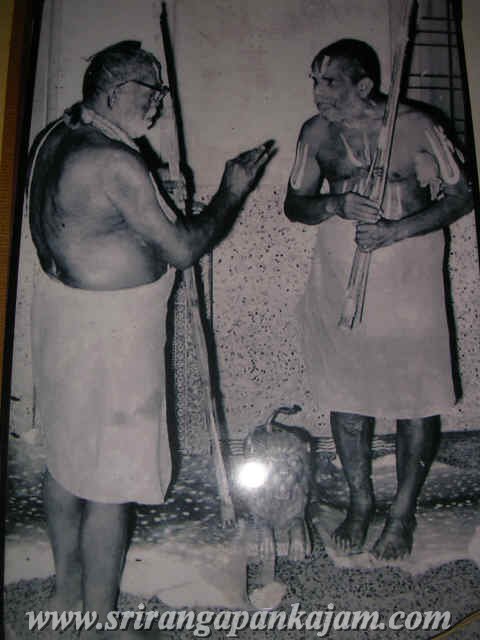 (Srimath Azhaiyasinger Jeer Swamigal (Left side) with Srimath Sri Thirugundathai Andavan Swamigal (right side)
Three hundred years ago, the nayak rulers had left the main Rajagopuram incomplete due to Muslim invasions. The most venerable Sri Azhaiyasinger Jeer Swamigal of Ahobila Mutt dared to undertake this tremendous task on his old but doughty shoulders and achieved this Hercules Task. The Maha Samproksham of this monumental Rajagopuram was celebrated on March 25th 1987. The total expenditure on this project is roughly estimated around 104.25 lakhs.   A Holy adventure happened in our era!.

4 comments on “Srirangam – The Legend”