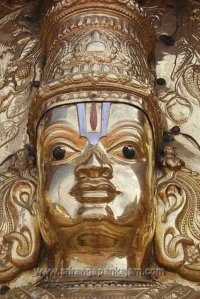 The origins of the ancient Srirangam Temple, the abode of ‘The Superme’, are shrouded in legendary antiquity.Emperor Ikshvaku, a precursor of Sri Rama, in recognition of his great meditation obtained ‘Sri Ranga Vimana’ and he installed the deity at a holy place between the rivers Sarayu and Thamasa in his capital ‘Ayodhya’.

The installation ceremony was performed in regal splendour by Sri. Ikshvaku in the month of ‘Panguni’ (around March). (This event is still celebrated at Srirangam even today by a special Brahmotsava called (Adhi Brahmotsavam).

Lord Sri Rama presented the ‘Ranga Vimana’ embodying the deity to Sri Vibhishana, brother of Ravana when he crowned him as the King of Lanka. Sri Vibhishana on his return to Srilanka, placed the vimana on the banks of the Chandra Pushkarani tank and worshipped.

When Sri Vibhishana prepared to leave, his efforts to lift the Vimana was in vain. King Dharma Varma, the Chola dynasty at that time, who had been struck by the magnificence of the deity, desired to have it for himself.

Sri Vibhishana reconciled himself to the will of Lord Sri Ranganatha to stay on at the same holy spot on the banks of river Cauveri.

The Lord who faces south, however promised Vibhishana to shower His grace on him and his kingdom. The antiquity of Sri Ranga Vimana and Srirangam is also mentioned in many puranas.

It is believed that King Dharma Varma is the first constructor of a temple around the Ranga Vimana and installed the deity as Sri Ranganatha.

He had also built the enclosure round the vimana, the maha mandapam, the Shrine of sri Vishveksenar (Senai Mudalver) with the tower, Mandapam (Azhahia Manavalan Thirumandapam) and the stone pavilion for the tank Chandra Pushkarni.

The major share in building this temple goes to the Cholas, who bestowed on it liberal endowments